American artist Lawrence Weiner visited my studio on Sunday. It was such interesting and good feeling to talk to an artist who can usually be read in the art history books. Surprisingly down to earth, Lawrence is a modest, humourous but intelligent man who doesn't appear as a contemporary master. It's such a sharp contrast from the image of those successful artists, especially those in mainland China.

It's my good fortune to have him visited.

Para/Site Art Space is delighted to present American conceptual artist Lawrence Weiner's first solo project in China. Known for his radical use of language, he will produce a wall installation in English, Traditional and Simplified Chinese specifically for this exhibition. There will be an artist talk held in conjunction with his presentation.

Born in New York, Lawrence Weiner is one of the most iconic artists of our time. A central figure of Conceptual Art since the 1960s, he concluded that viewers could experience an artwork simply by reading a verbal description of it . Not long after this, Weiner turned to language as the primary vehicle for his work, declaring with his statement of intent in 1968 that:

"(1) The artist may construct the piece. (2) The piece may be fabricated. (3) The piece may not be built. [Each being equal and consistent with the intent of the artist, the decision as to condition rests with the receiver upon the occasion of receivership.]"

Like other Conceptual artists who gained international recognition in the late 1960s and early 1970s, Weiner has investigated new forms of display and distribution that challenge our traditional assumptions about the nature of the art object and its relationship with the viewers. Wall installations, consist ing solely of words and punctuation painted on walls in his signature font, have been his primary medium. He believes that the artist himself needs not do the lettering itself, as long as the sign painter complies with the instructions dictated by the artist. Although his work s focuses on the potential for language to serve as an art form, the subjects of his epigrammatic statements are often directly related to the physical arrangement of the letters on the wall or to the viewers experience of reading these statements.

Lawrence Weiner has exhibited in many major international museums and will have a retrospective exhibition at the Whitney Museum of American Art in the end of 2007. 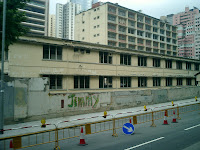 Walking past Oil Street last week, the former artist village has become a car park. All the buildings there are still deserted. The characteristic morgue which was turned into Artist Commune has even completely demolished to widen the road.

Imagine if the artist village were still here in the last five years, how the Hong Kong arts scene would be?
Posted by Studio bbq at 6:05 PM No comments: 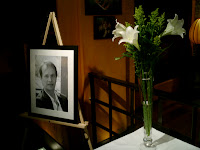 Last Saturday was the memorial of Jonathan Napack in FCC. A few people of the arts community flew over and a few from Hong Kong. Some might be from the press circle, I guessed. It brought people together. It was mixed-feeling. Sad but light-hearted as I recalled Jonathan's cynicism/criticism always carried certain humour. A very well edited DVD of slides of Jonathan's images would moved quite some people. http://www.meowsix.com/6o3folder/jn_web.mov
Posted by Studio bbq at 8:02 AM No comments:

This morning when I checked my email, I found Luca's message. A good start for today! Luca was almost in my age when we worked together in a small farm in Ferrara 15 years ago. Tracking down Luca was also part of my recent activities recalling old friends. I remembered he was a son of a general in the army, then living in Rome. It became his interest to work in this biodynamic farm every summer. For me, it was simply a solution to remain in Italy or Europe before I sorted out what to do next. I worked there for almost a month before I went to Spilimbergo to do the photography course. Since then I didn't return.

It was a very interesting place after all. It's run by a couple who followed the teachings of Rudolf Steiner's Antroposophy. The man was Silvio who graduated in economics in America. It was still rare in the early 1990s to meet an mid age Italian who spoke fluent English. It was very physically hard work but intriguing if you're interested in the idea of spirituality or Joseph Beuy's art. It was a late afternoon in Sept and I stirred up a huge bucket of water mixed with a tiny bit of quartz which was stored in horns and buried underneath the earth for the whole summer. It's an organic fertilizer which could raised about 20% of their crops as they said! Today I checked out wikipedia and found actually it got a name as mixture 501! http://en.wikipedia.org/wiki/Biodynamic_agriculture
Posted by Studio bbq at 7:21 PM No comments:

I was late for David Clarke's opening last night but there was still quite a crowd. Not a small show, there are more than 60 photos. Being an art history professor and making photos about Hong Kong continuously, it's interesting to think about the conherence between his art studies and photo project. He currently researches into the issue of water in Chinese ink paintings.
Posted by Studio bbq at 7:27 PM No comments:

The other day I found my very old address book (not the digital one, a real book I bought twenty some years ago). There were many name that I could hardly recall but also some familar but not in contact since long time ago. I was just curious about what they're up to. I started some keyword search on internet. Of course, most didn't return with any result but I did got updated with a few. Two died already. A painter died in 1999 and a theatre educator 3 years ago. Sad but not too surprised.
I remember it was in Palermo in 1991. Painter Marco was only an aquaintence of my friend. I only got his phone no and tried to call him hoping for free lodging! But he forgot my friend! However, he said since I got his no. and name, I should be a friend!. I ended up staying in his place for 9 days. We talked a lot and hanged around with his friends but did nothing. I recalled he never drank water, but only beer(dark) & wine.
Alan the educator has already looked quite old when he was only 40 something when I met him in 1992. I didn't know him in the beginning and visited him in London with a common friend. He was intellegent with certain elegance, maybe some kind of British gentleman-like. He's very open however and it' very nice to talk to him. We kept writing each other for almost half a year. When I came back to Hong Kong, I still received another 4 or 5 Christmas cards from him.
Posted by Studio bbq at 11:09 PM No comments: 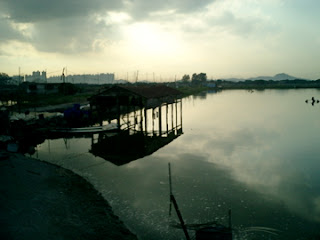 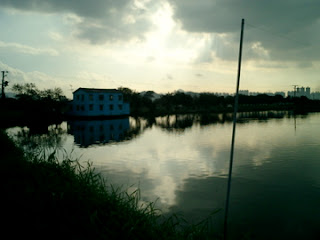 Recently I have been involved in a research about the fish ponds in Hong Kong. Yesterday I went again to Sun Tin of Yuen Long to photograph. We all know there is huge (wild) countryside which is such sharp contrast with the city. I almost forgot there is also the rural & suburban area. Working there was fun indeed. There is also arcadia in Hong Kong!
Posted by Studio bbq at 10:56 PM No comments:

I did an interview with Jonathan about his living space in Hong Kong last February. It was the time he was seriously thinking to move to Beijing. But then the sound recording was bad and I requested to do it again. A month later, we did. And he decided to remain in Hong Kong. I don't know if the end would be different if he really moved to Beijing. After he passed away, I listened to the tape again, his voice was still vivid.... For those who like to hear him again:

http://leungchiwo.net/Jonathan_Napack.mp3
Posted by Studio bbq at 7:54 PM No comments: