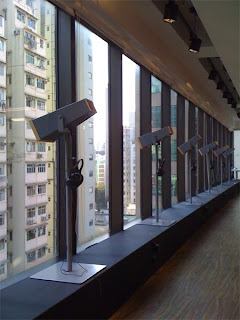 My new site-specific project is now being exhibited at the Asia Art Archive. Probably it is the most difficult to explain about!

Process:
A group of interviewers were recruited to interview people from the neighbourhood about their treasurable possession. The artist listened to these audio recordings and transcribed/rewrote them into a series of monologues. Then the artist also interviewed the interviewers and has written another set of monologues about their experience and memory of the previous interviews. All the monologues were compiled and edited into eight pairs. Finally the artist read them together with his long time collaborator Sara Wong as the voice over of totally eight channels of video of slow panning motion of the close-up image of the windows from the buildings around. Eight video-viewing stations have been made and set against the cityscape as the backdrop of the installation.

Keywords:
Colonial The Asia Art Archive which houses the project is located in Possession Street that was extended from the waterfront where the British army landed in 1841.
Urban The location and the nature of the space where we are based.
Art In the name of art we begin to think beyond what we see and experience.
Observation The basic activity when encountering something unfamiliar, but perhaps we can also observe the familiar for something different. In addition, I imagine the AAA as an observation platform, a place to see how other see.
Tourist One becomes tourist to re-visit his/her home hoping to see something new. It is natural to see tourists in the observation platform.
Gaze/view Gaze is more dominant than view.
See/seen As said, we see how people see.
Photography It is this gaze for sure whereas our naked eyes always scan.
Value I try to learn about subjective value. It is the value being described but not to be justified.
Introspection When we start to talk to ourselves, pretending to talk to others….
Connection It is interesting to see how people can be connected, especially if invisibly. There is now connection between the AAA and its neighbours not because of their proximity…. Seeing is the link which is invisible.
Seeing It is a subjective act. No one else can really see if one really sees.
Voyeurism A voyeur sees another voyeur.
Private/pubic It is a performance which negotiates these two realms.
Community I am not sure. Or could there be a community that its members share views or have opposite views?
Fictional There are facts but no fact is identified. Or it simply does not matter one talked about facts in these interviews.
Interview The view in between, or views between two persons.
Monologue The subject is I.
Dialogue I and I.
Shift Still image in motion.
Windows The opening to go in but not to come out.
Process/medium The way to talk is more interesting than what to talk. My role somehow is also like a medium that might be tempted to take over.
Transcribing It is a creative process to turn from what you listened into somewhat you would like to read.
Reading It is not role-playing but to replace someone’s presence with your own voice. That is to possess.
Image We keep telling the reality is the substance which is far more important but we still like to treasure the image because it looks better than the reality.
Imagine However, the best image only exists when it is invisible.
Opposite field Il contro campo where we see each other, like the photographer and the photographed but their roles can be swapped.
Relational It is a trendy word.
Identity Something we do not really need but I. We better subvert it.
Posted by Studio bbq at 7:16 PM No comments: