Just got a sad news from Wendy Gan about Malaysian Chinese artist Emil Goh:
"Emil passed away suddenly on the morning of 7 September 2009 in Seoul. He had a seizure of some kind in the morning. The ambulance was called but his heart had stopped beating by the time the ambulance reached the hospital. His girlfriend was by his side.
This has been a huge shock. He was still young and with no health problems that we knew of. We do not yet know what exactly happened.
I hope you will remember him for the enthusiastic foodie and wonderful artist and designer that he was. He had a keen eye for the mundane but quirky beauty of small things and his vision, his sense of humour and his mind that bubbled over with intellectual curiosity and delight in the world will be sorely missed by all of us." 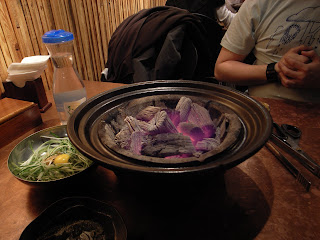 Our last meal in Seoul when I was there in 2008. Emil sitting behind the Korean bbq.
Posted by Studio bbq at 7:18 PM 1 comment: